Waders, or shorebirds, are birds which belong to some families of the order Charadriiformes (just like seagulls, terns, skuas, and auks). They are characterized by their usually long legs and bills, and they feed mainly by hunting small invertebrates along shores or mudflats. They are often migratory, and clear sexual dismorphism (difference of appearance between males and females) is rare. All birds are shown in summer plumage.
Oystercatchers are the group of species which form the Haematopodidae family. Most oystercatcher species are found in South Asia and Africa, but one species is found in Europe as well. This species, the Eurasian oystercatcher (Haematopus ostralegus) is therefore called simply "oystercatcher" in Europe. It is a fairly large bird (40-47.5cm in length, wingspans around 83cm) with striking black and white plumage, red eyes and bill, and pink legs. It breeds in fragmented populations from Iceland to eastern Siberia, and winters in North Africa. In the East Atlantic Arctic, it breeds around Iceland, the Faroe Islands, and Fennoscandia. It is a regular visitor to Svalbard in spring and early summer, and a rare visitor to Greenland from April to October. Some individuals winter in Iceland and the Faroe Islands. 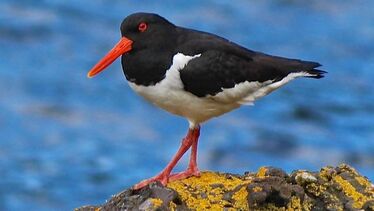 Charadriidae is a large family which contains plovers as well as lapwings and dotterels. Members characterized by their much shorter bills compared to most waders. Species that are common in the East Atlantic Arctic include:
Scolopacidae is the sandpiper family. Sandpiper is a general term, but the family includes many birds called by other names such as snipes, curlews, godwits, knots, whimbrels, and more. It is a large family, with many members in northern latitudes -- the 26 species that are most common in the East Atlantic Arctic are listed below.
This article, written by Andy Stoddart from Bird Guides, is a great resource on identifying the Eurasian woodcock, great snipe, and common snipe.