The following is an near exhaustive list of sea bird species commonly found in the East Atlantic Arctic. Sea birds are birds which spend their life almost exclusively on the water except for the breeding season, and get their food exclusively from the sea. They are not normally found inland. These birds exhibit few differences between males and females.
Suliformes is the order that contains Gannets (Sulidae) and Cormorants (Phalacrocoracidae). These families were previously classed in the same order as pelicans, Pelecaniformes.
Gannets and boobies, or "sulids" are members of the Sulidae family. Sulids fly then plunge for fish midair, taking them about 1-2m underwater. The only member of the sulidae family in the East Atlantic Arctic is the Northern gannet Morus bassanus, and it is also the largest member of the family (87-100cm in length for wingspans of 170-180cm). They have breeding colonies in eastern Canada, Iceland, Great Britain, Norway, the Faroe Islands, and nortwestern France. 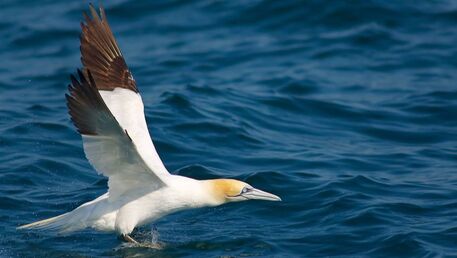 Cormorants and shags are members of the Phalacrocoracidae family. They are excellent divers, and some cormorants have been found to dive down to 45m. However, their short wings make them inefficient flyers. Two species of cormorants and shags are commonly found in the East Atlantic Arctic.
Procellariiformes is the order that includes petrels, fulmars, shearwaters, albatrosses, and some storm petrels. They are collectivelly called "tubenoses" for their most prominent unifying feature, their tube-like nose on top of the beak. This complex nose gives them a unusually powerful sense of smell for birds. They are also known to be so adapted to flight and life on the sea that they have lost most of their ability to walk. The order contain four families, but only two are present in the East Atlantic Arctic.
The Northern storm-petrels, classed in the family Hydrobatidae, are a family of pelagic birds (living their life mostly on the sea, far from shore) which are known to be active in their breeding colonies only at night. East Atlantic Arctic storm petrels include the following species.
The Shearwaters and petrels are the members of the Procellariidae family, which the largest family in the Procellariiformes order. Like the northern storm-petrels, members of the procillarridae family are colonial breeders, but some can be seen more frequently from the coast. Common Procellaridae in the East Atlantic Arctic include the following species.